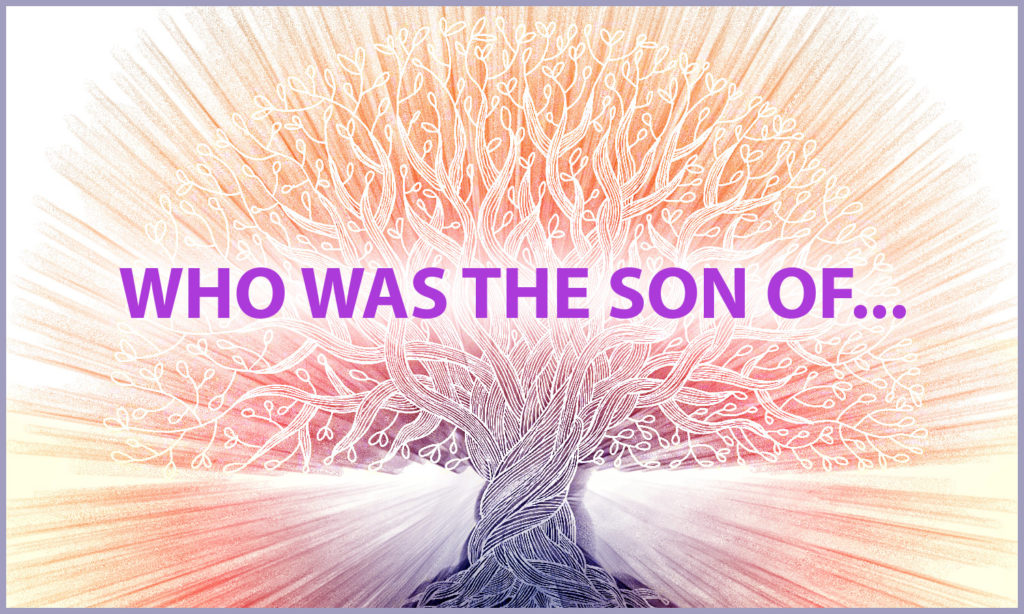 When we come to one of the genealogies in the Bible, we will more than likely just skip past it and get on to the good stuff. The New Testament actually begins with a genealogy, the family tree of Jesus. Not many of us would put this text on our list of “life verses” or favorite passages. But if we take the time to understand what Matthew is doing here, we will not look at this “boring list” the same way again.

Years ago, I heard a fascinating presentation on the way our brains work to move us in and out of sleep and consciousness – to make us alert when we need to be and to keep us in a normal state of “auto-pilot.” There are processes in the brain that filter all the information (sound, touch, sight) constantly bombarding us. These processes distinguish between what is significant and what is not so that we don’t have to focus on everything (and possibly loose our minds!).

Most of the time we are living on “auto-pilot” – we can do most of our daily activities without having to intentionally focus on them. Then, our neural processes wake us up out of auto-pilot and makes us aware that we need to pay attention to something. There are three key things that will cause us to wake up: 1) Something that is familiar, 2) Something that is unique or unusual, and 3) Something that is problematic or dangerous.

We have all had the experience of being in a crowded place and hearing someone call out our name. Immediately you are alert, trying to see who is calling for you. That is trigger #1: something familiar. If you were driving home and suddenly Bigfoot appeared at the side of the road, you would be on high alert. That is trigger #2: something unique or unusual. And finally when we are presented with something that is problematic or dangerous, our minds spring quickly to action, focused on the issue at hand. That is trigger #3.

Now here is the interesting thing. If you look at Matthew’s genealogy, you find all three of those things.

First, Matthew is seeking to show that Jesus is both an heir of the Abrahamic promises and also the long expected Messiah—The Davidic King. So he starts with all the familiar names that you would expect to find establishing this fact. He begins with the simple statement, “The genealogy of Jesus Christ, The Son of David, The Son of Abraham.”  As anyone familiar with the Hebrew Scriptures would know, the Promise of the Messiah was built on the Promises given to Abraham and David – it is through their family line that the Savior would come. Other familiar names you would expect also appear: Isaac, Jacob, Hezekiah, Josiah, etc. Jesus is descended through the promised “seed” line.

But then Matthew throws in some names that we would not expect. And they are all names of women! Tamar, Rahab, Ruth (a Moabite, excluded from the assembly of Israel), Uriah’s wife (Bathsheba). At this point, any good Israelite would “wake up.”  (I hold the view that Matthew writes to Israelites seeking to convince them of Jesus’ Davidic Kingship.) Why would Matthew include these names?

If you go back and look at each of these women’s stories you discover that these women are not ones that would necessarily be first on the “Esteemed Spiritual Women of the Bible” roster. In fact, these names lead us to some embarrassing narratives of Scripture. Incest, prostitution, entrapment, adultery and murder are not “virtues” we would associate with The Righteous King! Matthew, you have our attention!

There is a fifth woman in the list, Mary, who has been made pregnant by the Holy Spirit of the Lord God. For Joseph at least, this was a scandal (see Matthew 1:18-19). It remains an outrageous scandal to this day for everyone who cannot welcome the truth of Jesus’ true identity! The women in Jesus’ family tree are all scandalous to say the least. But this very fact points us to the main point: The Lord God’s purposes are accomplished through His grace! From the very beginning, The Lord accomplishes His purposes in and through human failure, not in spite of it.

Nevertheless, Matthew’s genealogy is getting out of hand.

The Problem to Be Solved

Now Matthew includes a logical train wreck! This is trigger #3: the problem to be solved. Matthew includes the name Jechoniah in his list. Who is he? Jechoniah is also known by the names Jehoiachin (1 Chronicles 3:16) and Coniah (Jeremiah 22:24). Jechoniah was a king in Judah during the time of the Babylonian invasion and deportation who was so faithless that he was cut off by The LORD: “This is what the Lord says:  Record this man as childless, a man who will not be successful in his lifetime. None of his descendants will succeed in sitting on the throne of David or ruling again in Judah” (Jeremiah 22:30).

Now look at that last declaration: “none of his descendants will succeed in sitting on the throne of David or ruling again in Judah…” Matthew, have you lost your mind????!!! If Matthew is seeking to prove that Jesus is the long expected Davidic King from the right family line, it would appear that he has just made a fatal mistake. Nobody in their right mind would include this name in a proper genealogy of The King. That’s the problem. We are awake. Matthew, you have our attention. What are you doing?

I think Matthew’s answer comes throughout the rest of his Gospel but is encapsulated in two simple statements here in chapter 1.

He Will Save His People…

First, it is clear that we need to understand that Jesus has no human father. When Matthew gets to Joseph, he does not follow his established pattern of “Joseph fathered Jesus…” Instead he says, “Joseph was the husband of Mary who gave birth to Jesus who is called The Messiah (The Anointed King)” (Matthew 1:16). Joseph is the husband of Mary, not the physical father of Jesus.

In that same dream, the angel gives us the second statement that helps us understand Matthew’s attention grabbing genealogy: “Mary will give birth to a son, and you are to name Him Jesus (Yeshua, meaning “YHWH saves!”), because He will save His people from their sins” (Matthew 1:21). Jesus has come to save His people—all His people—from their sins. And in the spiritual ecology of His universe, the only way to do that was by becoming one of us.

“He became what we are
that He might make us what he is.”

As Paul says in Romans 8:3 “By sending His own Son in the likeness of sinful flesh and for sin, He (God) condemned sin in the flesh,…” Jesus was Himself, “without sin” (see Hebrews 4:15; 2 Corinthians 5:21; 1 John 3:5; 1 Peter 2:22). Yet He enters the scandalous muck and mire of the human condition in order to save the outcasts, the cursed, the treacherous, the insignificant, the faithless—the very people who make up His family tree! People like us who fall so far short of the glory God intended for us (Romans 3:23-24).

So there it is – Matthew’s attention grabbing genealogy.  Using the familiar, the unusual, and the problematic, Matthew seeks to grab our attention, to heighten our awareness so that we can see and hear Jesus – the long expected Messiah who has come to save us from our sins.

Posted in Updates
← Hope, Trust and Love in the Age of Fear | Part 3The Hope of Jesus’ Resurrection →