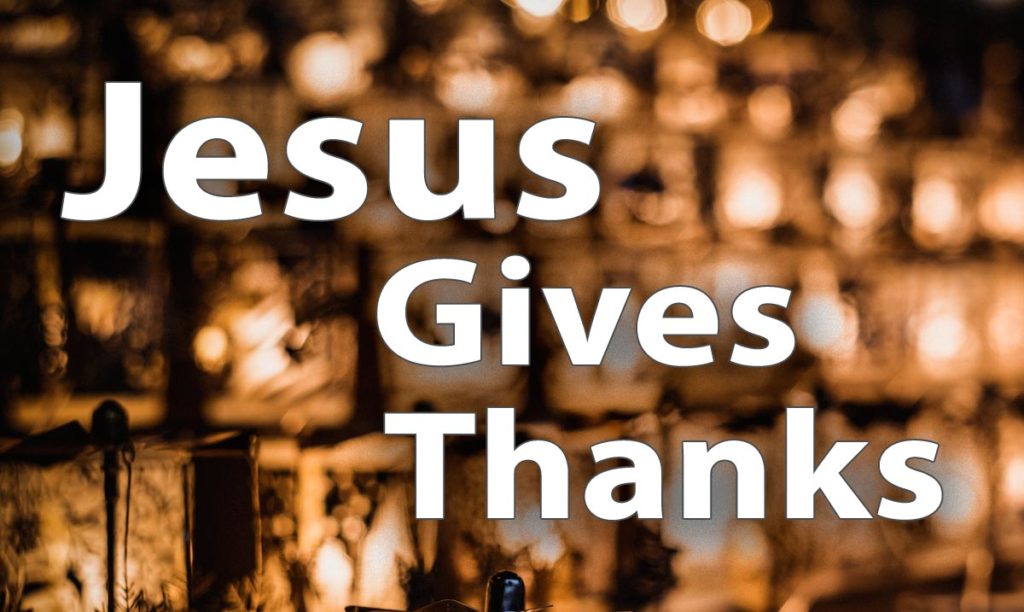 I hope you are all rejoicing and giving thanks on this Thanksgiving 2017. I got up early this morning and thought I would write out a short piece that has been on my mind for the last couple of weeks. This year, I have been reading through the Gospels. As we got closer to Thanksgiving, the question came to me, “For what did Jesus give thanks?” I had never thought about this question before and as I searched out the anwer, what I found was surprising.

FOR WHAT DID JESUS GIVE THANKS?

I expected to find many examples of Jesus giving thanks in the Gospels. Instead there are only four key places where it is specifically mentioned that He gave thanks.

Jesus Gives Thanks for Father-God’s Gracious Way of Revelation

After  the disciples return from proclaiming the Gospel and doing the powerful works of the Kingdom, Jesus responds to their good report with:

At that time Jesus declared, “I thank you, Father, Lord of heaven and earth, that you have hidden these things from the wise and understanding and revealed them to little children; yes, Father, for such was your gracious will. All things have been handed over to me by my Father, and no one knows the Son except the Father, and no one knows the Father except the Son and anyone to whom the Son chooses to reveal him.” (Matthew 11:25–27)

Father-God does not do things the way we humans do. In His “upside-down” Kingdom the first are last and the last are first. The proud are humbled and the lowly are exalted. So here, Jesus gives thanks to the Father for hidding the things of the Kingdom from the “wise” and revealing them to simple (foolish) children.

Immediately after this, Jesus gives His great invitation:

We can follow Jesus’ example in giving thanks to Father-God for revealing Christ to us and calling us to Himself in His great grace:

And because of Him you are in Christ Jesus, who became to us wisdom from God, righteousness and sanctification and redemption, so that, as it is written, “Let the one who boasts, boast in the Lord.” (1 Corinthians 1:26–31)

Jesus Gives Thanks for Father-God’s Provision

For three days a great crowd of people (4,000 men not including women and children) had been with Jesus as He taught and healed. At the end, Jesus wanted to feed the people before He sent them back to their homes. All the disciples had were seven loaves of bread and a few small fish. But then Jesus gave thanks:

Now think about it: there is no way that such meager provisions would be enough to feed such a large crowd. BUT Jesus gives thanks for what was provided and it multiplies into way more than was needed. Everyone ate their fill and there were even leftovers for those who came later.

Following Jesus’ example, we to can give thanks to Father-God for what He has provided, no matter how meager. I am still learning this lesson: as we give thanks for what we have, Father-God often blesses us with more than we need. So when we have little but need much, we give thanks.

Jesus Gives Thanks for Being Heard by the Father

Jesus good friend Lazarus was deathly ill. Instead of going immediately when He heard the news, Jesus waits. By the time he reaches Lazarus’ family, Lazarus had been dead for four days. There was great mourning and even Jesus wept. But He had something greater in mind than simply healing Lazarus. Jesus instructed the people to take away the stone that covered Lazarus tomb:

So they took away the stone. And Jesus lifted up his eyes and said, “Father, I thank you that you have heard me. I knew that you always hear me, but I said this on account of the people standing around, that they may believe that you sent me.”  When he had said these things, he cried out with a loud voice, “Lazarus, come out.” (John 11:41–43)

Following Jesus, we can give thanks to Father-God knowing that He hears our prayers – He even knows what we need before we ask:

“And when you pray, do not heap up empty phrases as the Gentiles do, for they think that they will be heard for their many words.  Do not be like them, for your Father knows what you need before you ask Him. (Matthew 6:7–8)

Not only can we be sure that Father-God hears our prayers, even more we know that Jesus and the Holy Spirit continue to intercede for us!!!

“… the Spirit helps us in our weakness. For we do not know what to pray for as we ought, but the Spirit himself intercedes for us with groanings too deep for words.” (Romans 8:26)

But because [Jesus] remains forever, He holds His priesthood permanently. Therefore, He is always able to save those who come to God through Him, since He always lives to intercede for them.” (Hebrews 7:24–25)

We can be thankful that Father-God continues to hear Jesus!

Jesus Give Thanks for the Cup and the Bread

In the last days of his earthly ministry, Jesus gathers His disciples for a final Passover celebration. In just a short time, He would be nailed to the Cross and being forsaken by the Father, He would carry the sins of all the world. Knowing His suffering was at hand, He stood before those whom He loved and served, and GAVE THANKS:

“And when the hour came, he reclined at table, and the apostles with him.  And he said to them, “I have earnestly desired to eat this Passover with you before I suffer.  For I tell you I will not eat it until it is fulfilled in the kingdom of God.”
And he took a cup, and when he had given thanks he said, “Take this, and divide it among yourselves.  For I tell you that from now on I will not drink of the fruit of the vine until the kingdom of God comes.”
And he took bread, and when he had given thanks, he broke it and gave it to them, saying, “This is my body, which is given for you. Do this in remembrance of me.”
And likewise the cup after they had eaten, saying, “This cup that is poured out for you is the new covenant in my blood. (Luke 22:14–20)

We follow Jesus in giving thanks, not just one time out of the year, but as our way of life, as Father-God’s will for us:

Rejoice always! Pray constantly. Give thanks in everything, for this is God’s will for you in Christ Jesus. (Thessalonians 5:16–18)

So thankful for each and everyone of you who are part of our Truth Seekers Fellowship family!

Have a blessed and joyous Thanksgiving!