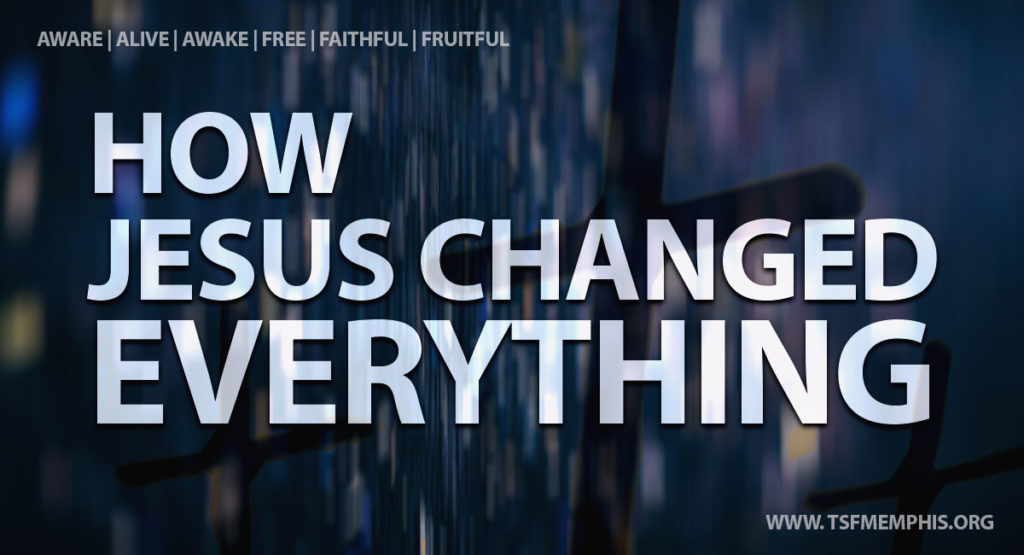 Now brothers, I want to clarify for you the gospel I proclaimed to you;
you received it and have taken your stand on it.
You are also saved by it,
if you hold to the message I proclaimed to you
—unless you believed for no purpose. (1 Corinthians 15:1-5)

The three days in which we remember, contemplate and celebrate Jesus’ death, burial and resurrection are the crux (from Latin meaning “cross”) of the year for followers of The Way – the Church, the Body of Christ. In these three days, Father God working in Jesus Christ through the Holy Spirit changed everything. The message of what He did for us in those days is the very heart of The Gospel – the Good News that we have been saved and set free.

It is no accident that the three days of Jesus’ death, burial and resurrection fall within the cycle of the Spring Feasts/Festivals given to the people of Israel. The Feast of Passover – which is at the heart of these festivals and is mentioned in the Hebrew Scriptures more than any other – commemorates the redemption of Israel from Egypt by the LORD’s great and miraculous deliverance. In a sense, the celebration of The Passover by the Jewish people throughout the millennia is a celebration of their “day of salvation” when the Lord delivered them from slavery and set them free to be His people.

But when Jesus came as the Great High Priest of the better things Father God had planned (see Hebrews 9:11) and as the final sacrifice for sins (Hebrews 9:12-15; 10:1-18), He changed everything.

We recently published a post of our family Seder that we use to celebrate Passover/Easter. It includes pdfs for both the Host/Leader and participants. Click on the image to go to that post.

In 1 Corinthians 15:1-5, the Apostle Paul gives us one of the most important passages in the New Testament about The Gospel and its content. He begins by saying he wants to clarify or make clear the Gospel that he had proclaimed to the Corinthians. Before he does so, he reminds them of how they had responded to it.

Their response is the same as all who trust the Good News that focuses us on Christ. We 1) receive the Good News – which is to say we welcome it as truth. We 2) take our stand on/in it meaning it becomes the foundation of our lives. And finally, we are 3) saved by it IF we hold firmly to it.

Paul now focuses on the content of The Good News. Notice how he begins:

For I passed on to you as most important what I also received…
1 Corinthians 15:3

There is an old saying that has been unfortunately and wrongly attributed to St. Francis of Assisi: “Preach the Gospel at all times; use words if necessary.” This view does not square with Scripture in any way. The truth of the Gospel cannot be gleaned through someone’s good works and activity. The Gospel must be spoken, it must be proclaimed. The Gospel is a spoken word that points us to Christ.

Paul has passed on The Gospel to the Corinthians just as it was passed on to him. Paul did not make these things up on his own; they were given to him by Jesus and other witnesses of His resurrection (see Galatians 1:11-2:10).

Jesus Died for Us

Now we get the “first things” to be spoken and received:

… that Christ died for our sins according to the Scriptures…
(1 Corinthians 15:3)

Christ died FOR our sins. That preposition for is such an important and glorious word in this context. To be clear, Jesus did not merely die because of our sins; He dies for our sins. He receives the punishment that our own sins deserve. He takes on Himself all our griefs and sorrows and sins and iniquities – which would utterly destroy us – and through Him we find peace.

Paul says this was “according to the Scriptures.” These are truths that The Scriptures clearly foresaw and teach:

“Surely He has borne our griefs and carried our sorrows;
yet we esteemed him stricken, smitten by God, and afflicted.
But He was pierced for our transgressions;
He was crushed for our iniquities;
Upon Him was the chastisement that brought us peace,
and with his wounds we are healed.
All we like sheep have gone astray;
we have turned—every one—to his own way;
and the LORD has laid on him the iniquity of us all.”
(Isaiah 53:4–6)

By dying for our sins, Jesus makes it possible for us to now be “the righteousness of God”! We are now the very examples of Father God’s “right way of doing things” through the salvation we have received in Jesus.

“He [Father God] made the One who did not know sin [Jesus] to be sin for us, so that we might become the righteousness of God in Him.”
(2 Corinthians 5:21)

Many critics of the Scriptures, and enemies of the True Gospel have held the position that it would be unjust for Jesus to die for our sins and so that can’t be what actually happened. This, in a weird way, both misses the point and gets the point all at the same time. According to human justice, that would be unjust. BUT, in Father God’s wise and providential ordering of things, Jesus dying FOR our sins is the definition of righteousness, justice:

“But now apart from the law the righteousness of God [God’s right way of doing things] (although it is attested by the law and the prophets) has been disclosed— namely, the righteousness of God through the faithfulness of Jesus Christ for all who believe. For there is no distinction, for all have sinned and fall short of the glory of God. But they are justified freely by his grace through the redemption that is in Christ Jesus.”
(Romans 3:21–24 NET)

“For Christ also suffered once for sins,
– the righteous for the unrighteous –
that he might bring us to God,
being put to death in the flesh but made alive in the spirit.”
(1 Peter 3:18)

At The Passover, the LORD commanded the people of Israel to mark their houses with the blood of the sacrificed Lamb so that the Angel of Death would pass over them as he struck the Egyptians. Now, the blood of Christ not only saves us from every form of death, it also cleanses us eternally, forever:

“[Jesus Christ] entered once for all into the holy places, not by means of the blood of goats and calves but by means of his own blood, thus securing an eternal redemption. For if the blood of goats and bulls, and the sprinkling of defiled persons with the ashes of a heifer, sanctify for the purification of the flesh, how much more will the blood of Christ, who through the eternal Spirit offered himself without blemish to God, purify our conscience from dead works to serve the living God.”
(Hebrews 9:12–14)

Jesus was Buried and Raised

Paul goes on to give us the next essential statement of the Gospel:

“…that He was buried,
that He was raised on the third day according to the Scriptures…”
(1 Corinthians 15:4)

As Paul makes clear in this passage, if Jesus has not been raised from the dead, then all of us who have trusted in Him are hopeless. The resurrection of Jesus is absolutely essential both to the message of the Gospel and also to our faith and hope.

All of the Gospels mention something about the burial of Jesus. The burial of Jesus gives the evidence of his death. There were those who knew Jesus and saw Him crucified. Some of these witnessed His burial. Many of these same people saw Him after His resurrection. And that brings us to Paul’s next point.

I often see this part of the “first things” of the Gospel left out: Jesus appeared to his friends and disciples after His resurrection. This is such an important aspect of those three days that changed the world. Those who knew Jesus personally would testify to the fact that it was indeed He who was crucified, buried and raised from the dead.

Chuck Colsen, who had been involved in the Watergate Scandal of the 70s, imprisoned and later became a follower of Christ, made the following observation about the resurrection.

“I know the resurrection is a fact, and Watergate proved it to me. How? Because 12 men testified they had seen Jesus raised from the dead, then they proclaimed that truth for 40 years, never once denying it. Every one was beaten, tortured, stoned and put in prison. They would not have endured that if it weren’t true. Watergate embroiled 12 of the most powerful men in the world and they couldn’t keep a lie for three weeks. You’re telling me 12 apostles could keep a lie for 40 years?
Absolutely impossible.”
– Chuck Colsen –

Everything we know about Jesus has been given to us by the men and women who knew Him, saw Him, touched Him and became witnesses to the reality of His life, death, burial, resurrection, and ascension. The choice that is before us is whether we will trust their witness and their words that have been recorded in The Scriptures for us.

“That which was from the beginning, which we have heard, which we have seen with our eyes, which we looked upon and have touched with our hands, concerning the Word of Life— the life was made manifest, and we have seen it, and testify to it and proclaim to you the eternal life, which was with the Father and was made manifest to us—that which we have seen and heard we proclaim also to you, so that you too may have fellowship with us; and indeed our fellowship is with the Father and with his Son Jesus Christ. And we are writing these things so that our joy may be complete. (1 John 1:1–4)

We hope in this season, as you read and reflect on the words of those who were first-hand witnesses of all these things, that you too will be changed by them. Only by receiving these things as truth – reality – can our joy be made truly complete. Because Jesus died for our sins, they no longer define our identity nor our destiny. Through faith, we are forgiven and cleansed and healed. Because Jesus was buried and raised to new life, death is swallowed up in life. Our last enemy has already been defeated and will one day be utterly destroyed. Through faith, death no longer has any hold on us.

Those three days over 2000 years ago in which Jesus died, was buried, and was raised are the crux of all human history. In the seemingly disastrous yet glorious and miraculous events of those three days, Jesus changed everything.

Posted in Updates
← A Family Seder