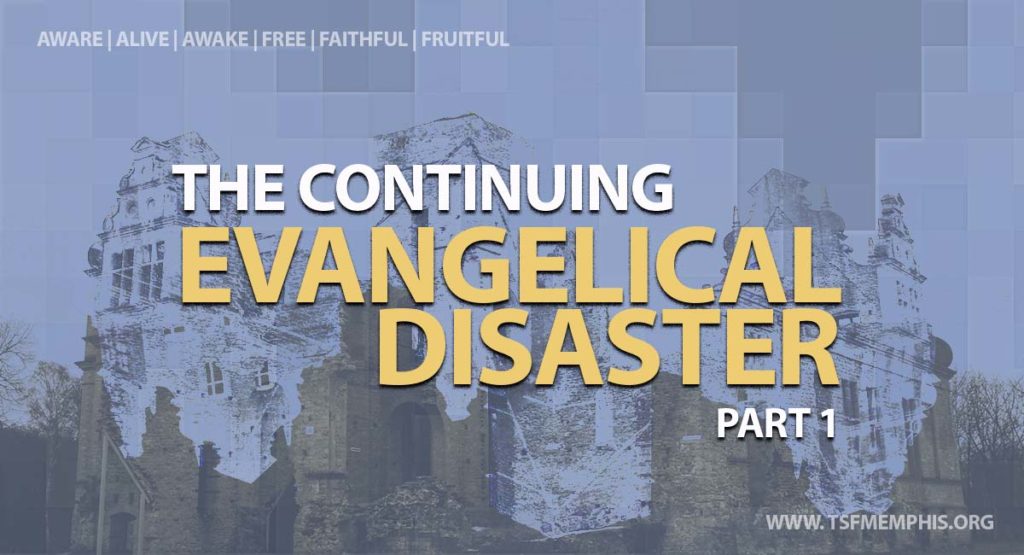 In 1984, Francis Schaeffer mourned the compromises that Evangelicals were making in terms of standing for truth and morality in his classic work The Great Evangelical Disaster. He warned that the compromises of his day would have severe ramifications for the institutional evangelical churches if not corrected.

Recently, Gallup – the global analytics and advice firm – released results from a study that showed for the first time since they have been collecting data, church membership has dipped below the majority – only 47% of Americans claim any form of religious affiliation.

We are increasingly hearing terms like “Exvangelical” to describe people who are walking away from Evangelicalism and/or “the church.” What do these things mean? and What do they signal for the future of Christianity in America?

For the past several weeks, Gallup’s article on church membership and religious affiliation has generated a bit of discussion. Taken at face value, it would seem that American culture is becoming more and more secular. What concerns many Christian thinkers is the question, “Will there come a day when religion in general and Christianity specifically will be irrelevant to the great majority of America?”

First, I would encourage you to read the Gallup article. You can click the pic below to go to it.

As with all statistical analyses, there are problems that we must be aware of. As you will see, this research includes data from a wide spectrum of religions. Also the article seems to be using the word “church” as a very large catchall term, at times including synagogues and mosques as “churches.”

The main observation that raises the questions are summarized in the graph below. Church membership hovered right around 70% from 1940 to 2000. Then there has been a fairly precipitous drop off of church membership since 2000.

So what has happened?

It May Not Be What You Think….

Russell Moore – the president of the Ethics & Religious Liberty Commission of the Southern Baptist Convention – recently published an article “Losing Our Religion” partially in response to the Gallup findings. He discusses his own crisis of faith when 15 years old, even contemplating suicide because he didn’t want to lose his “religion.”

At this point, I would encourage you to read Moore’s article. It might sting a little, but it raises critical questions about where we are and where we are heading.

Moore addresses some serious issues related to the “quiet exodus” that is now taking place among evangelical churches. Before we go any further, we need to clarify that term “evangelical.”

The term “Evangelical” is taken from the Greek term euangelion which means “Good News” and was first used by Jesus to describe His message of the Kingdom. It terms of a descriptor, “Evangelical” was first used at the time of the Reformation to distinguish the protestant churches who based their teaching solely in the truth of the Bible and the Gospel from the Roman Catholic churches that allowed many traditional (and unbiblical the reformers would argue) doctrines.

[ To read a good discussion of the issues surrounding the term “Evangelical” go here: Christianity Today: “What Does Evangelical Mean?”]

By the mid-1800’s the idea of “Evangelicalism” had become popularly accepted as  a way to denote people and institutions who affirmed the Truth of the Scriptures and the fundamental claims of and about Jesus as the One and Only Savior. By the early 1900s, “Evangelical” was used to represent those who held to a conservative, Bible based theology in contrast to liberal, skeptical theology that had taken root in many institutions by that time.

By the mid to late 20th Century, the term “evangelical” was used as a way to identify those who affirmed:

With these affirmations, evangelicals distinguished themselves from the christian liberals and skeptics that in one way or another denied or redefined these basic ideas. In short, evangelicalism affirmed a strongly conservative theological perspective and so the term “evangelical” has become almost synonymous with “conservative.” (We should clarify that we are talking about theological conservatism/liberalism, not political – that is another issue that we will discuss in the next part of this series. )

So, you can see why the trends have some worried. As people are claiming to leave evangelicalism, are they rejecting Truth in general and Jesus specifically? Are are all these people leaving the light side of conservatism to go to the dark side of liberalism?

Back to Moore’s article. At the heart of his observations is this:

“…the “culture wars” narrative of this secularization is increasingly demonstrated to be false—at least in the way presented by and to American evangelicals over the past fifty years. Some of the disaffiliation, to be sure, is due to liberalizing cultural norms, decreasing fertility, and increasing mobility. But the evidence is mounting that a significant amount of secularization is accelerated and driven not by the “secular culture,” but by evangelicalism itself.  (emphasis mine)

What!?!? the evangelical churches themselves may be a large part of the problem, driving people away? I said parts of this would sting. Moore goes on to clarify:

“What seems different about this quiet exodus is that the departures are heightened not among the peripheries of the church—those “nominal” or “cultural” Christians who grow up to rebel against their parents’ beliefs—but instead among those who are the most committed to what were previously thought to be the hardest aspects of Christian religion in modernity: belief in “the supernatural,” the rigorous demands of discipleship, and a longing for community and accountability in a multigenerational church with ancient roots and transcendent authority…

Whether or not you agree with all of Moore’s conclusions, his observations raise some significant questions that are worthy of deeper pondering and discussion.

I can say from my on experience, I have talked with more and more people who have been hurt or disenchanted in and by institutional churches. They have moved outside these traditional structures not to become liberal or non-believers but in hopes of finding authentic, Biblical Christianity in the presence of the living Christ.

We will turn to those questions in the next post in this two part series. Until then, I would encourage you to read these articles, especially Moore’s, spend some time thinking about these issues, and praying, asking the Lord for insight and wisdom.

Posted in Updates
← The Hope of Jesus’ ResurrectionA Vision for Christlikeness →